Second Year In A Row!

The 2018 Real Estate Video Influencers awards are presented by BombBomb and Tom Ferry. In their printed guide and document, you’ll find a deep dive into the phenomenal accomplishments of 75 distinguished video influencers as ranked by BombBomb.

The Smith Group and Tim Smith were awarded for the second year in a row.

The Goals Of This Project

"We began this substantial exploration in 2017 to give back to the real estate industry, to honor and celebrate amazing video influencers, and to learn, for ourselves, about top performers, strategies, and successes in the process. We hope you get the same enjoyment and education out of this as we have."

The stated goal prior to embarking on their inaugural journey was to celebrate and educate on the top ways real estate professionals are using video
to grow their businesses, and to recognize individuals and their achievements.

YOU, the reader, are welcome to determine if Tom Ferry and BombBomb achieved their desired outcome.

Request a link, to view (for free), this entire resource guide.

To start the nominations, BombBomb sent out emails to their full databases and ran paid and unpaid advertising to drive traffic to the nomination page. This netted approximately 1,200 nominations. They reviewed all previous winners from the 2017 Video Influencer Awards.

Video Channels: Their team started on the primary website of the nominee and browsed for video injection. Then, they proceeded to their social media profiles and any other links or websites provided through the nomination form. They finished in YouTube. They watched, on average, around six videos per nominee (as few as one or two and as many as 20), putting them at over 7,200 videos consumed throughout this vetting process.

They decided that each person would only rank in one category. This means that All Around winners could have ranked highly in one or more other categories. Likewise, a ranked person in one of the other categories may have been considered for All Around, but a particular strength landed them in that specific category. To be considered, the nominee had to be a practicing real estate agent, which unfortunately disqualified quite a few real estate coaches.

If you disagree with a ranking or feel someone is missing, make your nomination in 2019! Tom Ferry and BombBomb want to recognize, celebrate, and learn from the best of the best. As they move forward, they hope and expect this project will grow in awareness and nominations. Your nominations are encouraged and welcomed.

To celebrate specific achievements and specialties, as well as all-around performance, they created five distinct video influencer categories and here is how they approached them.

In this category, slideshows needed not apply. Photos set to music were disqualified. They also removed one-offs, which we saw as someone who may have done one or two videos really well but did not display a track record of consistency. They identified some obvious disparity in this category when comparing videos of luxury listings to listings priced closer to market averages and medians, so they decided to create a balance of both in our top 10. They gave extra props for uniqueness of videos - from HGTV-style intros, hosts, community injections, emotional connections, and more. Lastly, they discounted videos with no clear individuality or effort. This leveled the playing field for agents producing videos for low and mid-market listings. 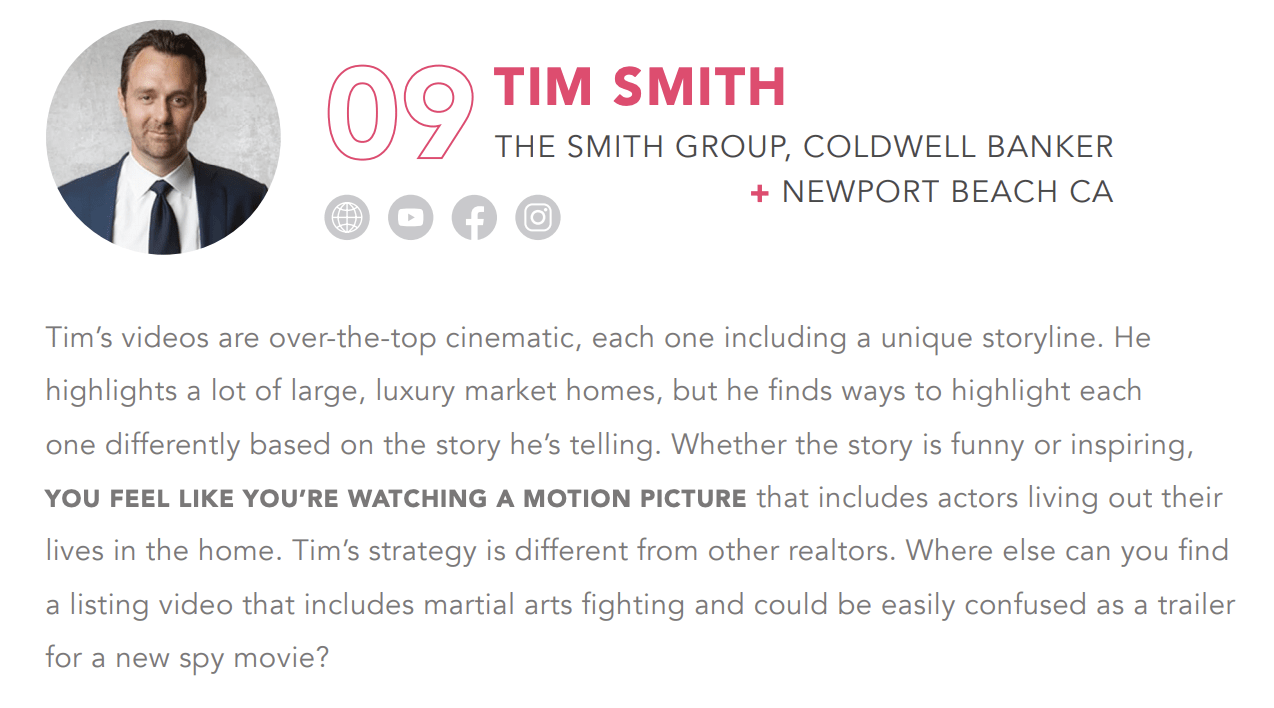